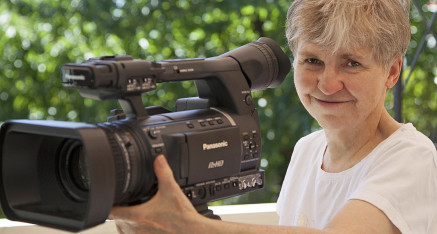 The Creative Talent behind Digital Elf

Bev Standish is the founder and creative mind behind Digital Elf Studios. Her recent animated/live action movie “The Escape of Middle C” was created as a teaching tool for music educators. It is a delightful short movie that appeals to audiences of all ages and showcases Bev’s mastery of film and music. She is a classically trained musician and composer as well as one of Portland’s most talented independent film producers and innovative 3D animation artists.

Bev scored film and video using computer assisted applications such as Cubase, Sibelius and Pro Tools. This led to the study of 3D Animation where she was able to combine her love of illustration, and music with modern filmmaking techniques. Digital Elf Studios brings top tier video, editing and animation software and hardware to every project. In addition to state of the art equipment, Digital Elf Studios has the capability to deliver original music scores along with stunning video to capture your event or get your message across.

As a child Bev was always interested in the arts. When she was awarded a prestigious scholarship to Interlochen National Music Camp; this was the springboard that led her to pursue music as a career. Attending Northwestern University in Evanston, Illinois she began to refine her skills in arranging and composing music. At The University of Kansas Bev pursued her graduate education in Music Therapy and guitar.

A commitment to Arts and Education

After her graduate studies Bev landed a contract to play piano for the Kansas City School District. Deciding to relocate to Portland, she worked as music teacher for the Portland City School District. Alarmed by budget cuts to Arts in Education Programs, Bev stepped up to action and founded Digital Elf Studios. Bev has continued to cultivate the creativity of kids by teaching animation classes at her studio as well as Robert Grey Middle School.

One of the programs near and dear to her heart is The Cinema Arts Camp. This is a community based program serving children ages 8-18. Participants create movies, green screen and insert their own computer animated characters.

When she is not making movies or composing musical scores, Bev can be found relaxing at home with her West Highland Terrier, Rosie.

Bev can be reached at bev@digitalelfstudios.com